|Why is static electricity generated?

When looking closely, you can see that all matter is composed of atoms.
An atom has protons and electrons that are in electrical balance.
Electrons may become separated from or attached to the atom with a small force.
Disruption of the balance between protons and electrons leads to static electricity.

Note) 3 electrons are mentioned in the figure, but the number of electrons varies depending on the atom.

When 2 objects come in contact with each other, electrons can move between the objects. When the objects are suddenly separated under this condition, the atoms are polarized and static electricity is generated.

Electric Polarity and the Amount of Electric Charge

The "electric polarity" and "amount of electric charge" when 2 objects come into contact with each other, are shown in the triboelectric series. 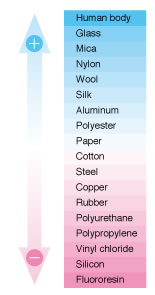 How to read the triboelectric series

Examples of Failures due to Induction Charging

1) An uncharged device has no electrical polarization.

2) When a vacuum pad that has been charged due to repeated operations gets close to the device, static induction occurs. This figure shows that electrons move toward the electrode: the chip and its surroundings are positively charged.

3) When the device is mounted on a circuit board, electrostatic discharge occurs. In this case, a conductive rubber pad needs to be used.

1) An uncharged device has no electrical polarization.

3) When the device is grounded under this condition, static electricity is discharged. Electrons (–) flow into the device from the ground.

4) If the device is insulated, it becomes negatively charged when the operator leaves the device due to the remaining electrons.

5) When the device is once again grounded, electrostatic discharge occurs again. Electrons (–) flow out.

What is an ion?